Where can you find it¶

You can access to the Scenes Menu by clicking on Smart Scenes voice between the Data Connectors field and the Smart Actions one.

A Scene is a sequence of commands that perform one or more functions. These Scenes are coded with a scripting language called: Lua. Each Scene may act on a Node, a Variable, a Gatewasy or even on another Scene. 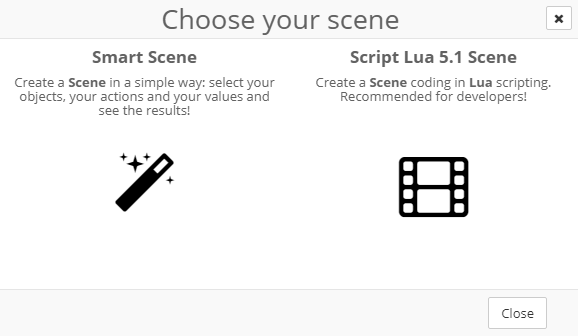 They represent a simple way to create a Scene without any particular knowledge: infact you only have to choose your Conditions that need to be met to trigger the selected Actions

They are pure Lua code inserted and executed by the User. It's not recomended for beginners.

In the Scene below, we get the Tag: Temperature from the Node with